Dear Gandhi Philatelists,
The India International Hot Air Balloon Mela was held in Delhi from 13th to 28th November 2010. The inaugural hot air balloon was from near Rajghat, Mahatma Gandhi Memorial. This was the first time a Hot Air Balloon Flight was initiated from near Rajghat.
To commemorate this event, 50 individually numbered Special Cards were prepared by Nikhil Mundra, Gandhi Philatelist (www.gandhistamps.com). All 50 cards were then flown aboard the inaugural flight of the Balloon Mela from Rajghat on the 13th November 2010.
The cards feature an artwork depicting the Rajghat memorial, the main gate and the 0 km milestone at Rajghat. A sample card is shown below: 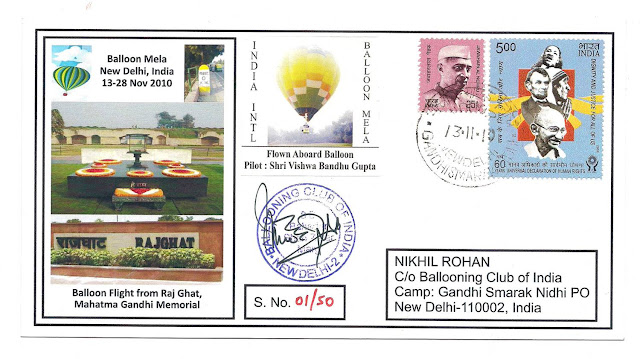 The cards have the following special features:
1) They have been postmarked on 13th November 2010 at Gandhi Smarak Nidhi PO. This post office is specially set up for servicing the Rajghat and the nearby Gandhi Museum.
2) Rs.5 Universal Declaration of Human Rights stamp used on the cards features, apart from Gandhiji, the following:
a) Mother Teresa – 2010 is her birth centenary year
b) Martin Luther King – Staunch believer in Gandhiji’s principles
c) Abraham Lincoln – US President who fought for human rights
3) US President Barack Obama, an admirer of Gandhiji’s principles, had paid homage to the Mahatma by visiting Rajghat on 8th November 2010, just within a week preceding to this balloon flight.
4) 25 paise Pt.Nehru stamp additionally used – Nehruji’s birthday falls on 14th November, a day after the Balloon flight.
5) An image of the balloon on which the cards were flown is also depicted on the cards as part of an additional sticker.
6) The cards have been signed by the Pilot of the Balloon flight and affixed with the seal of the organizing body, the Ballooning Club of India.
Gandhiji never used any aerial means of transport, and this card is a symbolic way of his ideas taking wing. Any queries are welcome at :
gandhiballoon@gmail.com
Thank you,
Nikhil Mundra
www.gandhistamps.com